Time to leave Sarlat for our visit to Avignon on the Rhone River.  We departed Sarlat in a downpour and misty views of the craggy hills and valleys.  There is a village on our route called Rocamadour, it is a UNESCO World Heritage site dating back to 1174.   Many of the villages in this area are built on steep mountain sides but this was extreme!  When we arrived, the area was blanketed in swirling fog, we saw the walk down to the village is by a steep stone walk. Not wanting the risk of a slip, we just admired its beauty from a café with a warm cup of coffee.

This evening we arrived in Avignon just in time for dinner and a short walk around the town to see the Pope’s Palace and Hotel De Ville light up for the night.  The Hotel De Ville is not a hotel, it is what they call their city hall. Every town has their Hotel De Ville with the French flag on the rooftop.

Our plan today is a visit to the city of Arles and the Camargue.

Arles was Van Gogh’s inspiration for many of his great painting. The tourist bureau has place plaques with paintings around the city where Van Gogh once stood with his easel.  It’s fun to see how many you find.

Arles is also famous for Les Arenes, the arena.  This was built by the Romans around 90AD and is said to be in better condition than the Colosseum in Rome and was built just a few years after Rome’s more famous amphitheater.  The scallop shell is a symbol of direction for pilgrims to Santiago de Compostela that used Arles as a rest stop on their way.  You can find these shells in many places around town. We found the one pictured, imbedded on a wall in the ancient Arena. 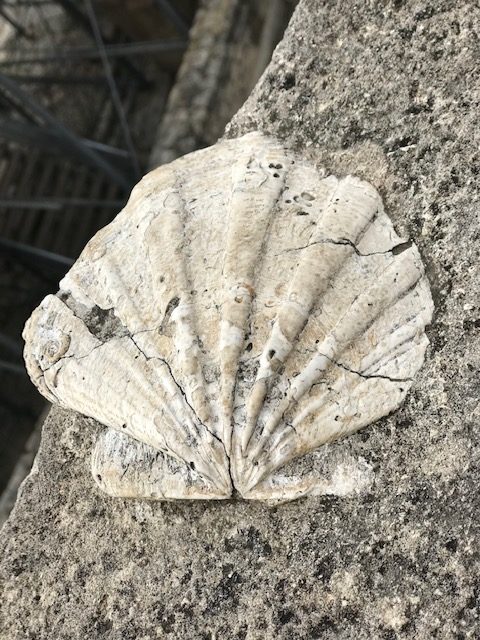 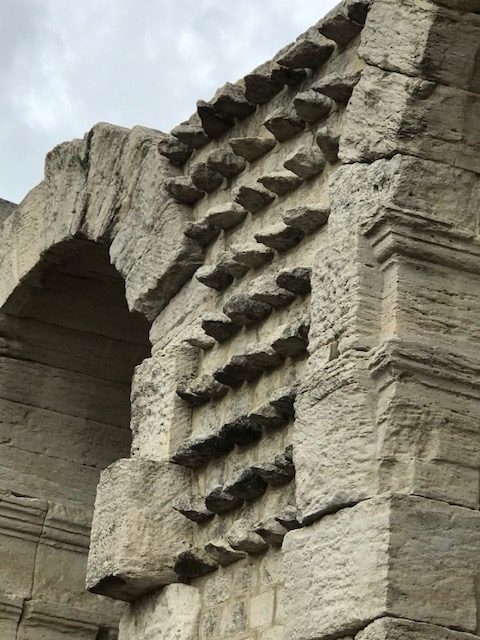 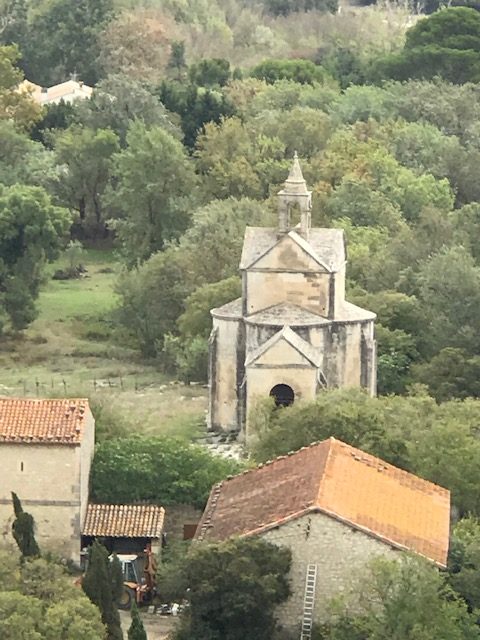 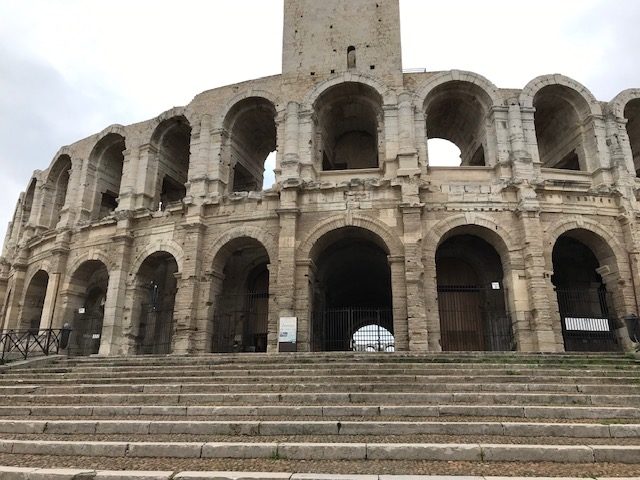 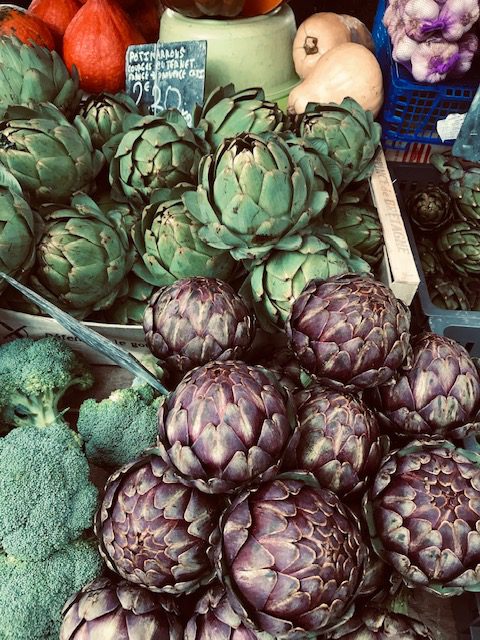 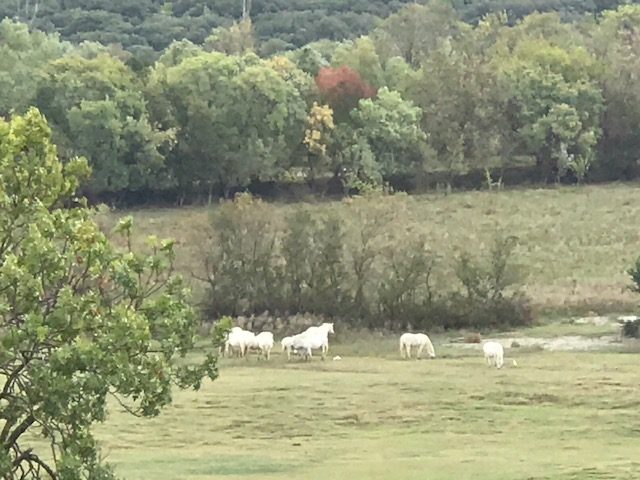 We were lucky that it was market day in Arles. We had time to wander to see the fresh produce, cheese and locally make crafts.

I had read about an abbey near Arles that has a lot of mysterious history so I thought it would be fun to explore the ruin of Montmajour Abbey. It is a 10th century Benedictine monastery that is built on a windswept rise of land in the middle of nowhere.  They wanted to be left alone to worship as they choose but it wasn’t meant to be, all the monks were burned at the stake for heresy.

We visited on a very windy day and there were only 2 other people in the abbey while we were there.  We only saw them from different levels within the building, it was a little creepy to have the place almost complete to ourselves.  One feature that really stood out were the burial crypts carved out of stone, you can see these in one of the pictures I have included in this post.  We enjoyed lunch at a local café across the road from the abbey.  Bill had a traditional dish called Guardian of the Camargue, basically a wild bull stew, fish for me.  Both were delicious, there is no bad food in France!

Beyond the abbey is The Camargue.  This area is a delta flood plain created by the Rhone River as it enters the Mediterranean.   This area is made up of sand dunes, salt flats, wetlands and pastures.

This area is famous for the flamingos that crowd here for 9 months out of the year. In the colder months they migrate to Africa.  You can also see the wild bulls and the wild white horses of the Camargue and lots of mosquitos in the summer.  Since we didn’t have time to drive through the area,   I was excited to see some of the wild horses from the top of the abbey! 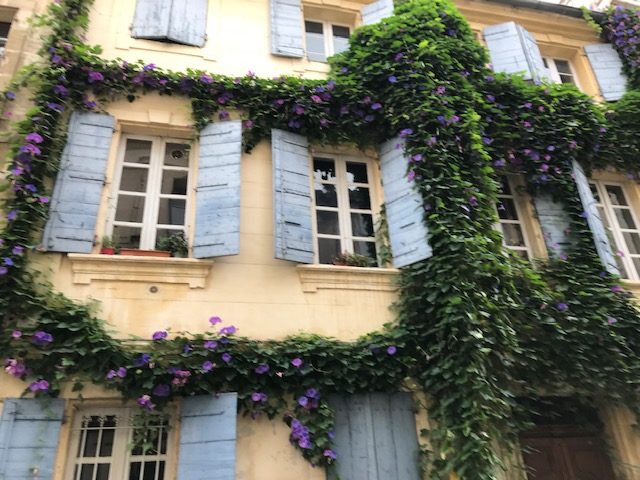 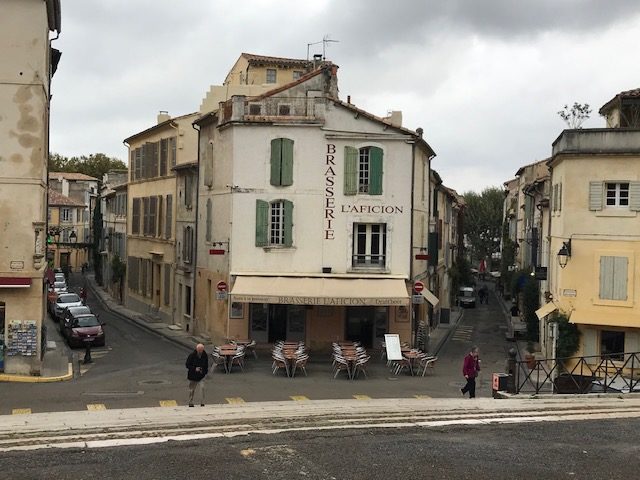 Your Next Adventure Awaits

Provide us with some basic details and we will be in touch to complete your booking soon! 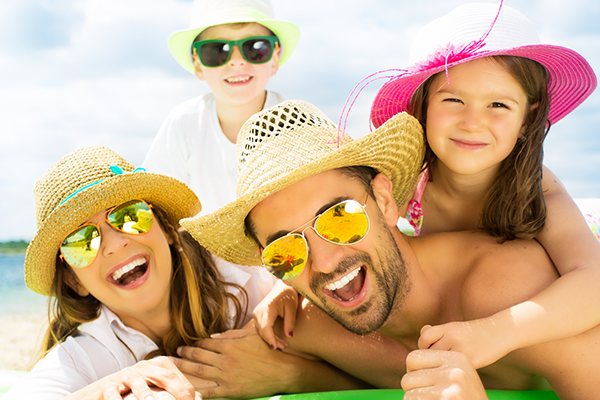 We use cookies on our website to give you the most relevant experience by remembering your preferences and repeat visits. By clicking “Accept All”, you consent to the use of ALL the cookies. However, you may visit "Cookie Settings" to provide a controlled consent.
Cookie SettingsAccept All
Manage consent

This website uses cookies to improve your experience while you navigate through the website. Out of these cookies, the cookies that are categorized as necessary are stored on your browser as they are essential for the working of basic functionalities of the website. We also use third-party cookies that help us analyze and understand how you use this website. These cookies will be stored in your browser only with your consent. You also have the option to opt-out of these cookies. But opting out of some of these cookies may have an effect on your browsing experience.
Necessary Always Enabled
Necessary cookies are absolutely essential for the website to function properly. This category only includes cookies that ensures basic functionalities and security features of the website. These cookies do not store any personal information.
Non-necessary
Any cookies that may not be particularly necessary for the website to function and is used specifically to collect user personal data via analytics, ads, other embedded contents are termed as non-necessary cookies. It is mandatory to procure user consent prior to running these cookies on your website.
SAVE & ACCEPT